My first impulse when creating this blog was to call it "Consciousness is Everything".  This is the title of a book on Kashmir Shaivism by Mahamandaleshwar Swami Shankarananda.  I had already read it at this point and, incidentally, I thoroughly enjoyed it.  So I asked his permission to use the title and called the blog "The Shiva Drishthi" in the meantime.  In a nutshell, the "The Shiva Drishthi", the viewpoint of Shiva, is the recognition of the fact that Consciousness is everything.  But I digress.

Swamiji graciously agreed to let me use the title of his book for this blog.  Below is his kind response, which I share because it both sums up the reason that I wanted to use this title and because Swamiji's warm personality really shines through:

Om Namo Narayanaya! It's a pleasure to make your acquaintance. I'm glad you're enjoying Consciousness Is Everything. I am honoured that you want to use my title for your blog. You can use that with my blessing. There is no greater philosophy than the non-dual philosophy of Consciousness. It's nice to meet you via facebook. Please give my love to Swami Swaroopananda.

Mahamandaleshwar Swarupananda is my Guru.  I had mentioned that he spoke highly of Mahamandaleshwar Shankarananda.  In fact, they were both performing sadhana together in their Guru, Baba Muktananda's ashram many years ago.  I am told that they are old friends. 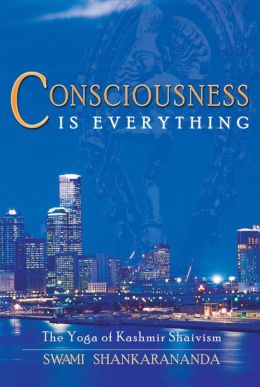 His very excellent book, Consciousness is Everything, is, in my opinion, the best introductory work on the subject of Kashmir Shaivism that there is (The Splendor of Recognition by Swami Shantananda taking a close second).  My first impression of Kashmir Shaivism was that it was stuffy, antiquated, and riddled with entirely too much archaic technical language.  Just thinking about it gave me a headache.  Swami Shankarananda's book really showed me how this ancient philosophical system and corresponding mode of practice is just as relevant now as it was in the 9th century.  Its cogent analysis of this often heady material clearly illumines the philosophy of the siddha saints, making it accessible to our own era.  Additionally, the depths that Swamiji's insights plumb and the wealth of experience from which he draws really underscore the point that this system is ultimately about the realization of something entirely outside the realm of mind; something infinitely more beautiful and perfect than one can possibly comprehend until mind is transcended (although that is not to suggest that mind is something other than That).  That was what did it for me, personally.  If it sounds like your cup of tea, do yourself a favor and check it out HERE.

Posted by Brandon Ballentine at 12:35 AM