I am very pleased to announce that The Authoritative Guru Gita of H.H. Mahamandaleshwar Paramahamsa Swarupananda Vishwa Guru Maharaj is now available for purchase HERE! 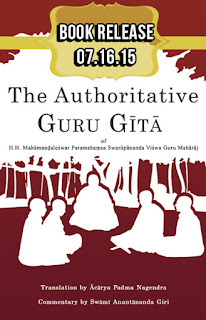 Sanatana Dharma (AKA Hinduism) is founded upon the Guru-disciple relationship. The Guru Gita is the most comprehensive work on the subject. While there are many versions of the Guru Gita, this effort contains an original translation of the complete version, which consists of 352 couplets (called shloka-s). Additionally, this book, The Authoritative Guru Gita, includes a commentary that is notable for a few different reasons. First, it provides insight into the philosophies and traditions that the author (or authors) of The Guru Gita draw from: namely, Kashmir Shaivism, Shri Vidya, and, possibly, some form of Vaishnavism. All of these fall under the broader umbrella of Tantra in this case. The commentary found here is also practical in nature. It is intended to serve as an aid in the practice of the yoga associated with the Guru Path. Incidentally, The Authoritative Guru Gita also includes the full 352-shloka Guru Gita in its original Sanskrit (in Roman script rather than Devanagari) in order to facilitate the chanting of The Guru Gita, which is one of its purposes. Finally, the above-mentioned commentary is noteworthy in that it was composed at the request and under the close supervision of Mahamandaleshwar Swarupananda, one of Hinduism's eighty Mahamandaleshwars. By definition, a Mahamandaleshwar is a theological authority, the weight of whose stance is second only to four Shankaracharyas. Thus, this truly is the authoritative position on The Guru Gita.
Posted by Brandon Ballentine at 1:13 AM