Sitting on a moss-covered log at the edge of a cliff that hangs over the Pacific Ocean, I curled my toes into the cold loamy soil beneath my feet.  I had just finished setting my intentions for the ritual.  Looking up, I realized that the psilocybin had already come on strong.  I looked East and what was once a seemingly normal outcropping of rock was now a Buddha-faced Native American Indian chief, his illumined crown exploding into a headdress of ancient cedars.  His upturned palms rested upon his extended arms at the level of his cheeks.  His open mouth and pursed lips implied that his breath was generating the wind that was driving the churning waves below. 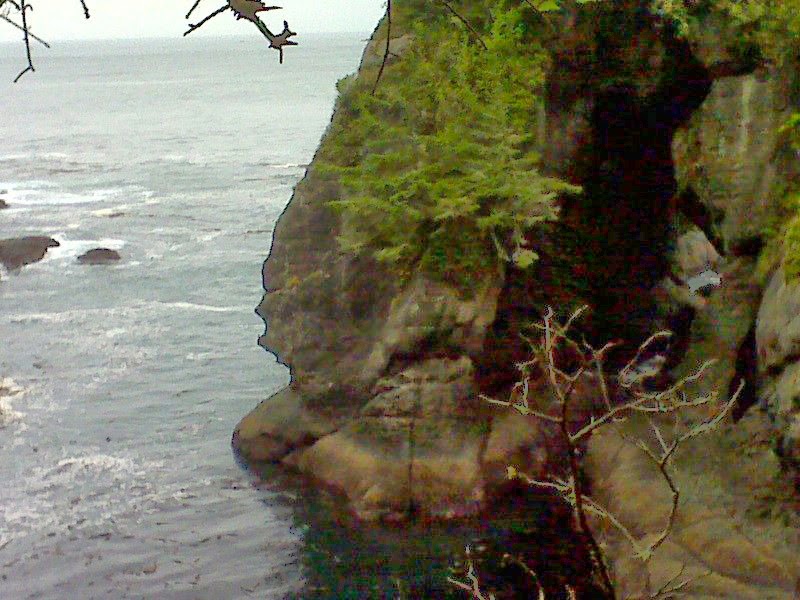 I had been on a quest for some time now.  Driven by strange but tantalizing experiences in the early stages of my experiments with meditation, I had gathered a lot of general information about many different schools of mysticism.  Taoism, Shamanism, and Yoga were what made the most sense to me by that time.  I had recently devoured a book on Yogic philosophy.  It was the first time anybody had really spelled out Advaita, the philosophical school of non-duality, for me.  Simply reading for the first time that the Self is Sat-Chit-Ananda, Existence/Consciousness/Bliss-absolute, was a satori experience in itself.  Somehow this opened something up for me and I was suddenly able to look at things in a way that was a game-changer.

I resolved to visit the Northwestern-most point of the contiguous United States, a few hours’ drive from where I lived at the time.  I happened to know that there was a major Earth-grid ley line that crossed this spot.  I would prepare by fasting from sugar, salt, alcohol, any refined/processed foods, and sex for a week.  Finally, upon arrival, I would consume a few grams of mushrooms with the intention of experiencing Reality at the level of only Sacchidānanda.

As wisps of dragon’s blood, frankincense, and myrrh curled and arched their way up to copulate with my olfactory sense I was utterly stricken with bliss.  I continued to stare at the unexpected manifestation of the Divine that had emerged from the adjacent stone cliff and I knew that it was alive.  I followed the wind leaving its mouth and watched how the wind played upon the surface of the water and vice-versa.  This was illustrated very graphically for me when a massive spherical cloud of little black birds flew in front of me, nestled neatly in a pocket of air pressure that followed the trough of a small but choppy wave.

The waves’ filling and crashing into the innermost reaches of the sandstone caves beneath me rhythmically vibrated the entire sea cliff that I sat upon.  I put my ear to the ground and listened to the briny deep filling and emptying from these various chambers and I was reminded of the systole and diastole of a living heart.  I sat back up and it seemed as if I could hear every last molecule of water colliding into its neighbor from British Columbia to Australia.

It seemed obvious to me that the distinction between all of the phenomena that I was witnessing was somewhat arbitrary.  It started with the question, “Where does the water end and the air begin?”  I couldn’t answer that question so I looked to one that should have had a more obvious answer: “Where does the air end and where do the birds begin?”  I couldn’t answer that question either.  Without further enquiry, I just knew that the air, water, waves, the land, the stone deity, the log I was sitting on, and I were all interconnected.  Everything had a place because this world is just a place for the only thing that really exists – Consciousness – to express itself in every way imaginable.

At this point in my life, I had done some things that I was less than proud of to say the least.  Deep down, I had not liked myself for a long time because I no longer lived up to the standard by which I judged others.  But having this experience revealed all of my mistakes as stepping stones.  Whatever qualitative value I had assigned to whatever particular thing I had done had had no impact on the perfection of Reality as I was now perceiving it at this transcendent level.  I realized that my past consisted of events that, while generally performed based upon erroneous assumptions, had been necessary to bring me to this point.  And so I forgave myself.  I saw that, like the new Reality before my eyes I too am perfect.  Purno’ham is how one says that in Sanskrit.  Purno’ham: I am perfect!

Then I found that, in not judging myself, I had no judgement to cast upon anybody else.  There were people who had really done me dirty and I had hated them with all the passion and intensity a person is capable of.  But this simple shift in perspective made it obvious that it just didn’t matter and so I let it go right then and there.  Prior to that point, I had never realized how much baggage it is to hold onto a grudge the way I had been doing since childhood.  It felt so good to have that weight off my chest.

I cried too.  I had started tearing up the minute that I first looked up from my incense and list of intentions.  By the time I got to purno’ham, I was bawling.  My heart was welling up, to the point of overflowing, with joy and gratitude in response to all that I was witnessing.  The raw, unfiltered beauty of everything was just so in-my-face that there was no ignoring it.  If I had been trying to do anything other than simply take it all in, it would have undoubtedly been incapacitating.  I was in love with everything.

This is how I experienced this particular level of enlightenment for the first time.  Somehow the biochemical shift induced by the psilocybin coupled with the ritual context I observed, the set and setting that I had sought out, and the intention that I went into the experience with; all of these factors converged to stop (or at least weaken) the normal processing of sensory data that occurs somewhere after it is apprehended by the senses but prior to its being perceived by the individual.  So I perceived Reality much more closely to the way that it actually is rather than perceiving it through various layers of mental conditioning.  In terms of what is categorically experienced, this is the perception of unity-in-duality – the recognition of which is ultimately the point of all of the various philosophical schools of Yoga/Hinduism, and every one of what are more broadly termed “wisdom traditions” for that matter.
The problem that I encountered is that, although the initial experience came relatively easily, as soon as the biochemical composition of my body returned to normal some four-to-six hours later, I was no longer experiencing Reality in this way.  The filters that ordinarily censor a person’s reality, whether they like it or not, came back full-force.  Yes, the experience was massively healing and cathartic.  It also allowed me to readily accept the claims of the sages who came before me because I had seen exactly what they were talking about.  However, the proverbial diplopia returned; that which causes one to see two suns when there is really only one.  I may have been able to accept that there is only one thing in the universe and that that one thing is Consciousness, but that didn’t make it any easier for me to perceive it.

I had continued my practice, but I experienced a lot of ups and downs.  Eventually I came across the concept that a Guru is necessary to get someone to this state and to keep them stable in it.  This is called sahāja saṃādhi, or effortless/natural absorption in the Divine.  Sure, it’s true that the Guru is inside of you and that, in the state of being identified with Reality at the transcendental level that I described above, one is no different from the Guru (or anything else for that matter).  But if one is not perceiving that for themselves then, naturally, this is not perceived to be the case.  Ramana Maharshi often used to say that the inner Guru and the outer Guru are both necessary:  The outer Guru pushes the mind inward while the inner Guru pulls awareness toward it from within.

So I went and found a Guru.  What I found is that performing the sādhanā, or practice, that he prescribed caused me to draw his Grace.  Grace can be thought of as a subtle and intelligent energetic force that triggers a chain reaction, propelling one toward the awareness of unconditioned Reality.  In the Guru’s transmitting and the seeker’s receiving his Grace, mental conditioning is burned off, Kuṇḍalinī is awakened and drawn upward, attachments and other unnecessary things fall away, and more.  Furthermore, all of this happens at a rate exponentially greater than when one performs sādhanā without the aid of the Guru.

I have been working with my Guru for three years now.  I’m not there yet, but what I have found is that my baseline level of awareness is much closer to the experience of enlightenment that I described above.  I no longer feel like a pendulum, swinging from the high heights of the most transcendent bliss, back into the hellish depths appearing to be as cut off from That as can be.  Additionally, bits and pieces of that state regularly flash forth.  It’s kind of like a large diamond with many faces.  The light catches a part of it and attention is drawn to that brilliant reflection.  When the light catches it differently, another facet is illumined and so that is where one’s attention goes.  This just happens spontaneously while going about one’s daily routine.  You can be at work, watching TV, or arguing with a family member and suddenly everything is the bliss of being and perceiving only Consciousness-absolute.

There is nothing in life to accomplish but this.  The beauty of this proposition is that one need not do anything fundamentally different from what they would be doing anyway.  Yes, there is a certain degree of self-effort involved.  Certain exercises, like seated meditation and mantra repetition, to give a couple of examples, should be worked into one’s routine.  However, this doesn’t mean that there is not room for everyday life.  It doesn’t mean one needs to adopt another culture or way of dressing.  One does not need to establish themselves as different or weird.  This is a completely practical, completely natural, and completely life-positive expression of one’s own personal evolution.  One continues to live life as normal.  The only thing that changes is the reason for doing so.
Posted by Brandon Ballentine at 12:43 PM